Creo Parametric offers nearly 1700 different configuration settings. These settings can be set as “defaults” by saving a configuration text file called a config.pro file. While config.pro files are a critical part of most organizations’ CAD setups, many users don’t interface with them on a regular basis and are often uninformed about what they are or how they work. Most users are aware, however, that settings can be modified inside Creo’s Configuration Editor, which allows them to search for a specific setting, provide a description of that setting, and change its value.

Below is an example config.pro file (located in the user’s working directory) along with how that it is represented in Creo’s Configuration Editor.

When the user first starts a new session of Creo, the application will default to these setting values. Notice that all four settings in both places have a value of “yes”.

If the user was looking to change a setting, they would most likely use the Configuration Editor to do so. In this example, we’ll change the first value of allow_float_opt_checkout to “no”.

When a setting is modified via the Configuration Editor, the setting’s value can be set as a “default value” for future sessions in several different ways:

Although they may seem to have the same effect, these three options function in drastically different ways.

Before we dive into the differences between these three buttons, it’s important to keep in mind that there are usually three layers of Configuration Settings. Having configuration settings set at multiple levels is the core reason for the differences between these buttons. For more information on these three different levels, you can read our earlier post that explains it here.

Most users simply start by hitting the OK button. Once a user hits OK, they receive a prompt asking if they would like to save these settings to a configuration file (see below). 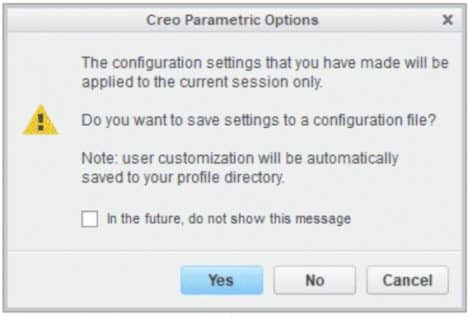 If the user selects Yes, it brings them to a Save As screen that opens into their working directory. At this point, most users will simply hit OK again, saving to the config.pro file. However, more often than not, this does not do what the user intends. 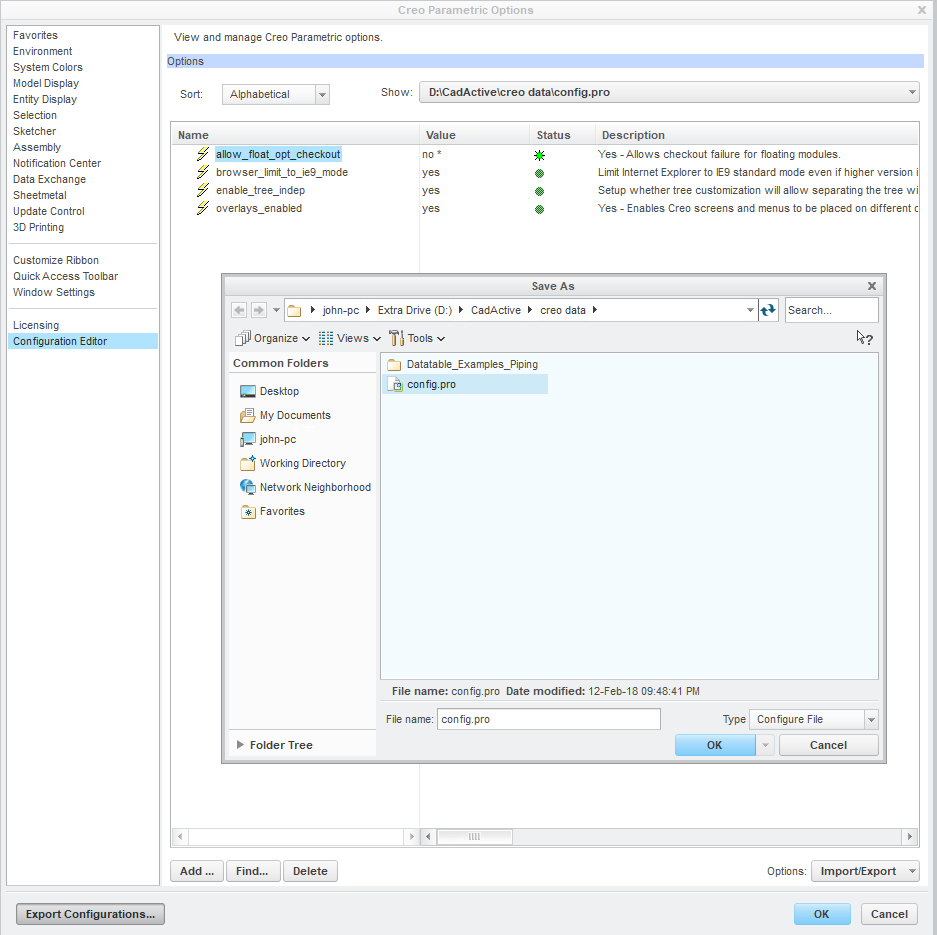 If a default config.pro file already exists in this directory and the user overwrites the existing file, then the following will happen:

This is what a user expects to happen, similar to the Save functionality from applications such as Microsoft Word. However, this button can sometimes lead to unexpected results.

For example, let’s say we’d like to save the original values (essentially what was loaded in the original config.pro file) along with our new changed value into a NEW file. If we repeated the same steps from above and the user then changed the file name to something different (in this example, we’ll call it backup.pro), the file may appear correct the first time around. However, repeat these same steps a second time with different changes and overwriting the backup.pro file – suddenly, the file doesn’t look like we expect it to. What happened?

The one setting we changed was saved, but it also added an entire duplicate section at the end of the file. This problem quickly snowballs as more and more changes are made to the backup.pro file and OK‘d in the Configuration Editor. This makes managing these files via a text editor confusing and often leads to errors as other settings are unintentionally duplicated.

Instead of simply hitting the OK button, what would happen if we hit the Export Configurations button instead? A similar Save As screen opens up, and many users may think that they are only exporting the settings that they currently see in the window. However, this is incorrect.

If a user hits OK in this scenario, Creo will export every configuration setting that is currently applied. This will not only copy the four existing working directory settings (outlined in red) but will also include all of the settings from the config.pro file that were applied at the installation directory level. In other words, it prints out one giant concatenated file. 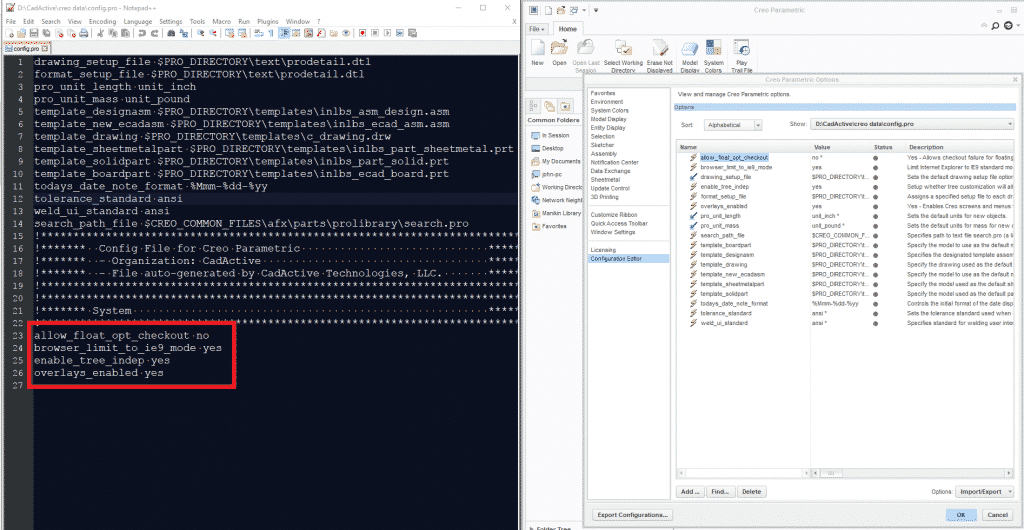 In some cases, this may be exactly what a user is looking for, such as when an administrator is trying to create an exact copy of how they want every user to be set up. However, if a user were to continue using this new config.pro file, they could easily make an overriding change to the settings deployed by the administrator to any of the lower levels (installation or user), throwing them out-of-sync with the rest of the organization or team. In other words, if an administrator later changed the pro_unit_length setting at the installation directory level, the user would no longer see that updated change. This can quickly lead to headaches for both the system administrator and the user.

The Export Per Current Filter Button

This button does exactly what it says – it will only export the options that are explicitly shown in the table area of the Configuration Editor.

For example, one effective method to export only the setting you’re interested in would be to change the Show filter at the top to Only changed. From here, the user could then explicitly select the settings he or she wanted to write and then click Export to Current Filter. The resulting file would only contain those selected settings and would be fairly easy to read/manage.

But, as the quote from Spider-Man goes, “with great power comes great responsibility.” In this situation, if the user had set the Show filter to All Options, then this would have written all 1700 configuration settings to the config.pro file.

To make matters even more complicated, it is not uncommon for users to have multiple .pro files in their working directory. Depending on the tasks involved in a modeling session, many users simply use the Import configuration file button (inside of the Import/Export option at the bottom right of the Configuration Editor) to load the desired configuration file and enforce the settings they need. For instance, many engineers working with a large number of mechanism constraints or simulations may have different settings than someone working with large 2D drawings.

After the import is complete, when we hit OK to apply the settings, Creo will similarly ask us to save the customization, as it did during a normal change from an OK. By hitting OK at this point, Creo will export a file of the current settings: 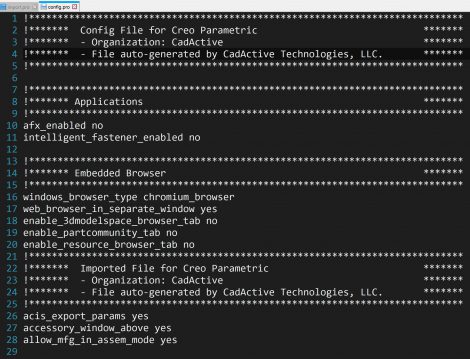 Although this may be a simple example, it goes to show how easy it is to accidentally overwrite your local config.pro file with settings that you may not have originally intended – essentially overwriting both your defaults and any standards your administrator may have intended.

CadActive’s SettingSync does away with these worrisome text file quirks and headaches. All of the configuration settings and profiles are set and managed via the user-friendly web interface. Your profiles can then be easily selected in Creo by any user in your organization using the GUI shown below. 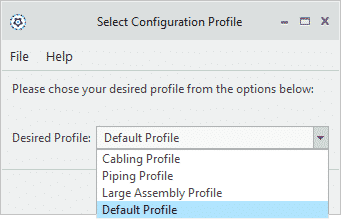 No more worrying about changing working directory .pro files, let SettingSync worry about the parsing and controlling of these files.