The bigger a system is, the more complex it is; this is no different for large CAD assemblies. Each component of the assembly is constrained to other components, sub-assemblies, and the top assembly – maintaining these references is referred to as interface management. In a normal design process, it’s not uncommon for component locations to move around, or for part numbers to change, or for a last-minute change from a supplier to affect your overall design. To keep up with these changes, CAD designers and engineers are constantly modifying their models to ensure the model looks appropriate, while also fixing model failures, broken references, and other headaches that often come with rapid design change and interface management.

Let’s look at a simple example to illustrate some of the interfaces designers have to manage while modeling an assembly. The following graphic shows a top assembly, a network data storage system. Inside of that assembly is a frame sub-assembly (structure), as well as three main internal component sub-assemblies: a power supply (PS 1), a disk drive (HDD 1), and a router (ROUTER 1). 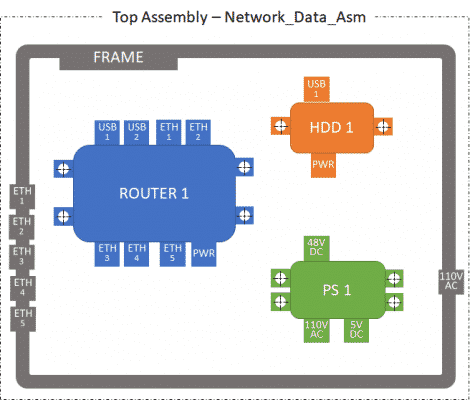 In real-world situations, this bookkeeping task becomes even more complex – as responsibility for each sub-assembly and the top assembly is frequently split amongst different engineers, teams, or external suppliers. It is not uncommon for a steady stream of design changes to affect the component interfaces.

Throughout the design process, we find ourselves adding even more content into our CAD model. Screws, nuts, bolts, wires, connectors, and many other details are required for us to get a clear understanding of how the design will function. A typical designer would want to do that as fast and as accurately as possible – however, often times they focus on creating something that “looks right”, but may not consider what references they are using along the way.

For example, when placing the “ROUTER 1”, our designer decides to place it 2 inches from the left wall, and 3 inches from the bottom wall. However, if the frame was to physically get larger, how may the position of “ROUTER 1” have to change? And how would that new placement effect wire lengths?

Another more serious example would be if the “ROUTER 1” is replaced with an entirely new model. What would happen to the connectors that we had constrained directly to the box?

Modeling operations such as these often create “external references”, which are generally problematic. To make matters worse, references between components require all components to be loaded into your CAD session. For complex assemblies, one improper or missing external reference can dramatically affect productivity by increasing load times, regeneration times, and graphics operations.

These examples help identify the problem – how should we build, identify, and label these references in a way that avoid external references, keep our team communicating properly, and help minimize our risk?

One solution that is widely accepted as a Creo best practice is to collect interface references in a skeleton. Skeletons are a special type of model used to communicate design intent by holding critical references shared by two or more parts. In the figure below the SKELETON part holds the interfaces for the four sub-assemblies. Design work on the top assembly, such as harness routing, can proceed using the interfaces managed by SKELETON without bringing all the components into session. 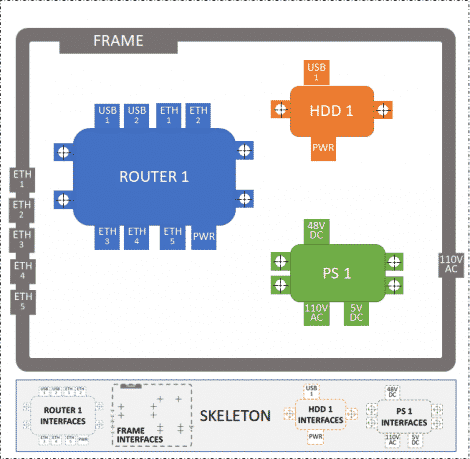 Design iteration is unavoidable and adds to the effort by requiring updates to the skeleton. In the figure below, the example assembly has experienced changes in component geometry and location. ROUTER_1 changed shape, PS_1 grew in size and added a port, and the FRAME ports moved. All 3 internal components moved within the frame. Work is required to update the skeleton to reflect those changes. 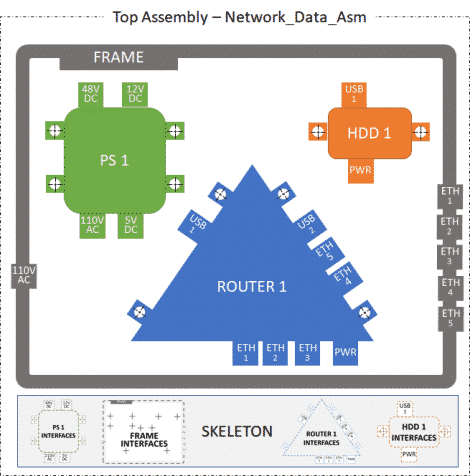 Skeletons Are Easier with Automation

Automate automatically copies desired interfaces to a chosen skeleton using external copy geometry features. In a relatively complex assembly, hundreds of interfaces can be copied instantly. When interfaces change, simply running Automate again will update the skeleton. The building and maintenance of the skeleton becomes a pushbutton operation with Automate.

PrevPreviousWhy Spec-Driven Piping?
NextKicking off 2018Next
Scroll to Top